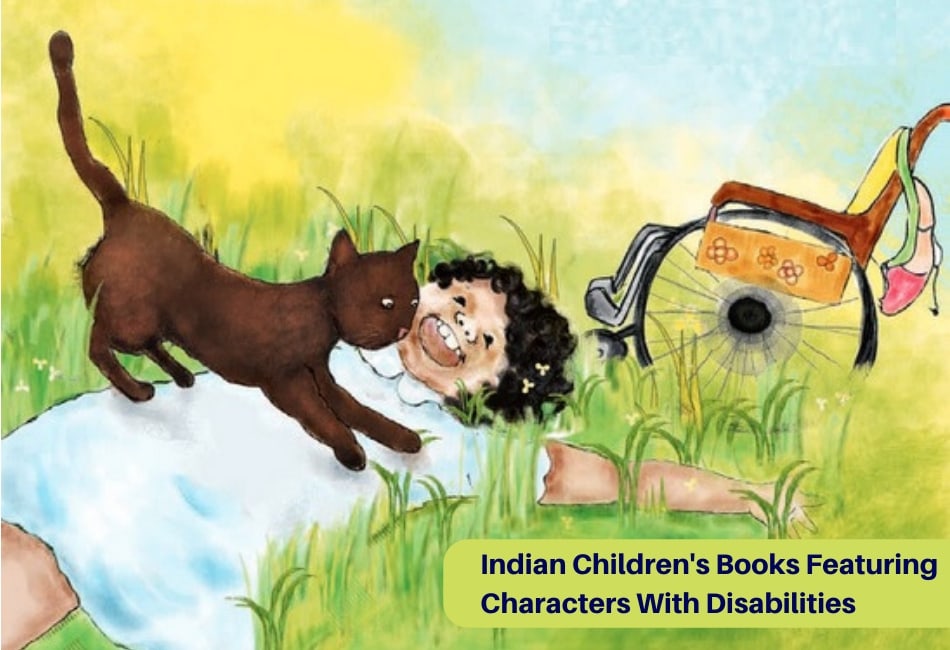 There needs to be more diverse representations of characters in children’s books so that young readers can not only recognise themselves in the books they read but also understand lives which don’t mirror their own. One way to make books more inclusive is to portray well-rounded protagonists with different kinds of disabilities. Some Indian publishers are doing an outstanding job of bringing out books which do exactly that.

So, without further ado, let’s get right to our booklist!

Dip Dip looks everywhere for her friend’s lost cat. And when it finally climbs up a tree and can’t come down, the only thing to do is…? Exuberant illustrations capture the spirited little girl for whom being on a wheelchair stops her from nothing!

Read Catch That Cat on GetLitt!

A little girl spills, drops, breaks, trips on things. She is called Clumsy, Slowcoach, Careless… words that scare away all other words. But in her head, words become stories and stories, pictures. With a box of paints and a brush, she sweeps herself away from the names people call her! Vivid watercolours lift her from her everyday milieu into a swirl of exuberance.

When the lights go off at the cave temples, it is quiet little Kanna who coolly leads everyone to safety. Light or no light, it makes no difference because he can’t see anyway. A joyous story that inverts the notion of ‘disability’ and portrays a child for whom having a visual impairment is just the way he is — and even a chance to have some fun!

My big brother Neel has wheels! Neel’s wheelchair transforms itself to fight dragons and monsters and chase away scary creatures of the night.

Read Neel on Wheels on Getlitt!

Magesh is different from other children. He’s no good with words. And when he’s misunderstood he gets upset and his movements get jerky. But there are two things he loves: playing with his brother Vignesh, and his Vibhuti Cat.

But what will happen when Magesh starts going to school? Will he take Vibhuti cat along?

6. Welcome To The Forest

Tulsa is off to Kanha Tiger Reserve with her school friends. Along with the forest officials, the students experience the jungle in a unique and exciting way.

Little Malathi wants to run after hens and chicks, and catch ripe yellow mangoes as they fall — but how can she, on a wheelchair? Moments and experiences from the remarkable life of disabled athlete Malathi Holla, with energetic illustrations full of warmth and cheer.

Krish has to give a speech at school. But how can he, when he stammers? And what’s worse, his partner is the Big Bully! Will Krish get out of this mess?

The World’s Most Chaotic Family has left him behind at a dhaba on the highway in the middle of nowhere.
He is rescued by an icecreamwala and suddenly, Kittu’s terrible, horrible day turns mad! Who would have thought that this middle-of-nowhere place would have a skate park? The icecreamwala’s daughter Mad is mad about skateboarding and now Kittu wants to zoom around on a skateboard, too! But can a boy with one leg who walks on crutches learn to skateboard? Is Kittu mad to even try?

Manya badly, badly wants to be Shere Khan in her school play. The Jungle Book is her favourite film and she knows all the lines. She’s sure she’ll be a superb Shere Khan.

But not everyone thinks so. Her classmate Rajat is always making fun of her stammer. Her English teacher thinks its risky to let her get on stage and her principal seems to agree. The more anxious Manya gets, the worse her stammer becomes. Will Manya lose her dream role? Can she overcome her fears and learn to roar?

4. Susie Will Not Speak

Jahan’s best friend Susie has a lisp. The boys in the park tease her and call her Thoothie and the kids at school laugh at her. Fed up, Susie decides to stops speaking. What is Jahan to do with a best friend who won’t speak?

When Kartik and Kavya move from Kolkata to Rourkela, neither is enthusiastic about living in a small town and leaving their old friends behind. But it is especially tough on Kartik. At school in Kolkata, no one paid much attention to the fact that he was one-armed, whereas in the new school, he is treated like a freak. Worst of all, the school football coach refuses to let him play. Will Kartik overcome the odds and play football again? Find out how Kartik and his new friends take on life’s challenges, in this tale of fun, football and friendship.

Read Against All Odds on GetLitt!

Nothing worries Nanju too much; not the fact that he walks funny or that he’s known as the class copy cat or that the cleverest (and prettiest) girl in class barely knows he’s alive. But when books start disappearing from the classroom, the needle of suspicion begins to point at Nanju. Aided by his beloved best friend, the fragile but brainy Mahesh, Nanju has to find out who the real thief is. Otherwise, his father might pack him off to Unni Mama’s all-boys Hostel from Hell, and Nanju might lose all that’s dear to him. Set in a school for children who are differently-abled, this funny, fast-paced whodunit will keep you guessing till the very end.

We hope you liked this booklist featuring characters with disabilities. There are many more books just like these in our GetLitt! library. So head to GetLitt! today and subscribe to get access to over 300+ books!

[All synopses have been taken from the publishers’ websites.]

Read: Book List: Indian Heroes and Role Models to Read Up On This Independence Day!

Read More: How to Get Your Child To Start Reading Short Stories For Kids