Most Popular Panchatantra Stories For Kids 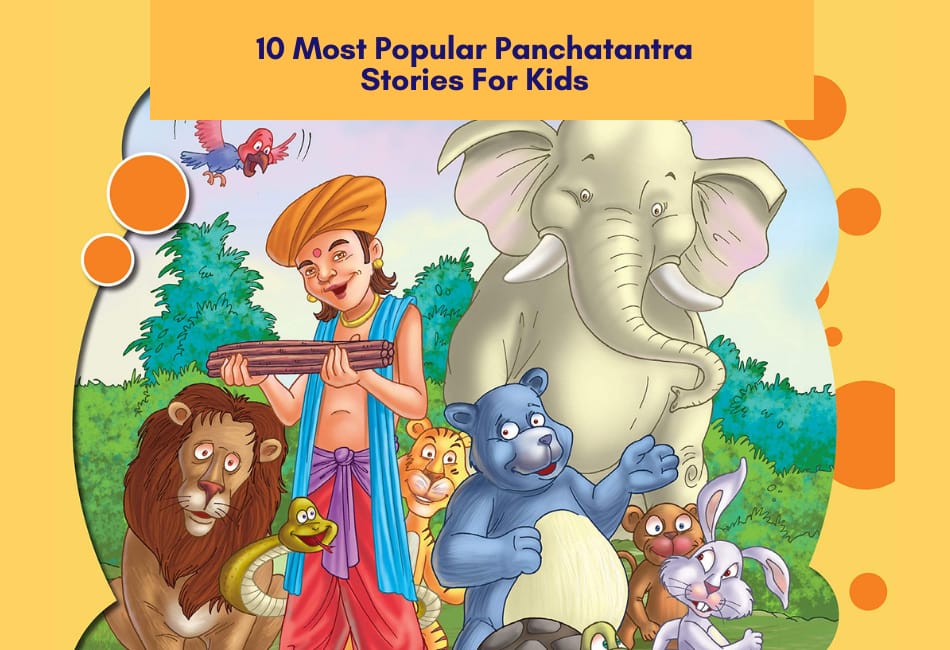 When we think of classic Indian tales that have stood the test of time, there is one name that comes to mind – Panchatantra stories for kids! These stories have taught children morals and life lessons that leave a lasting impression. Today’s blog will highlight ten of our favourite Panchatantra short stories that we hope you’ll narrate at your next bedtime storytelling session. However, before we jump into the stories, let’s get some information on Panchtantra short stories.

Who wrote the Panchatantra stories for kids?

Indian scholar and author, Vishnu Sharma, wrote the Panchatantra stories for kids in Hindi (Sanskrit) originally. The stories date back to 1200 CE – 300 CE, although some historians say they were written in 3 CE. Panchatantra stories for kids often feature animal and bird protagonists that make the subject matter and morals they teach easy for children to understand.

If we look at the actual word ‘Panchatantra’ it can be broken into two – Pancha meaning five and Tantra meaning principles. These five principles form the roots or themes of all the stories written by scholar Vishnu Sharma. According to historians, Vishnu Sharma was appointed by King Amarashakti to teach his three sons how to rule the Kingdom. Hence, the scholar broke down his teachings into five principles and it gave birth to the short stories we know and love today.

These witty stories have been passed down through generations. Many grandparents grew up with these stories and retell them to their grandkids. However, if you grew up in a household where these stories weren’t well-known, the books, TV shows and animated videos were your fallbacks. In fact, there are many Panchatantra stories for kids in Hindi and English. They’ve been translated into many languages to reach a wide audience. No matter the language, these light-hearted stories are a treat to read are ideal for bedtime storytelling.

Now that you’ve got a little idea about the Panchatantra short stories, let’s unveil our favourites!

Most Popular Panchatantra Stories for Kids

1. The Hare And The Tortoise

Slow and steady wins the race, remember this age-old adage? Well, it was inspired by the story about the hare and the tortoise. Here’s how this Panchatantra story goes – in a race between the speedy hare and the slow tortoise, all the animals in the kingdom assumed the hare would win. When both participants took off, the hare raced off into the distance, leaving the tortoise behind. After a while, realising that he was miles ahead, the hare decided to take a break, assuming that the tortoise wouldn’t catch up to him – this is where the story gets interesting – don’t believe us? Watch the video below to find out what happens!

2. The Goose With the Golden Egg

There are many Panchatantra stories for kids in Hindi that explain greed. However, this one about ‘The Goose With the Golden Egg’ is a very popular one, one we’re sure you’re familiar with already. The story begins with a husband and wife who own a very special goose who would lay a single golden egg every day. This egg would fetch a good price daily, which helped the couple grow their riches steadily. However, due to greed, they thought of cutting open the goose to get all the golden eggs at once and become richer faster. Sadly, this story doesn’t end well for the goose or the couple. Find out what happens in the video below!

3. The Mouse and the Snake

In this Panchatantra story for kids, a villager captures a snake and holds him captive in a basket. On the way home, the villager finds a mouse that he knows will make a good meal for the captured snake. The villager puts the mouse into the basket; the snake is about to attack it when the tiny mouse begs for mercy. The mouse promises to free the snake in exchange for being spared. Sounds like an exciting story, but how will it end? Check out the video below!

4. The Crane and the Crab

At number four on our Panchatantra short stories list, we have a tale that highlights the act of being cunning and taking advantage of innocent people. ‘The Crane and the Crab’ is about an ageing crane, who comes up with a cunning plan to catch unsuspecting fish for food. However, seeing the truth of the situation and fearing for his own life, a quick-thinking crab finds a solution to this problem. Who comes up on top, the crane or the crab – you’ll have to read the story or watch the video below!

In this Panchatantra story, kids learn that it’s best to avoid bad company rather than pay a heavy price. The two main characters, Right Mind and Wrong Mind, use their skills to make money. After earning their money, Wrong Mind convinces Right Mind to hide half their wealth under a tree. However, being selfish, Wrong Mind steals this money and blames it on Right Mind. What happens next? Check out the storytelling session below, to see how this intriguing story ends.

6. The Mouse King And The Elephant King

One of the most stereotype-breaking Panchatantra stories for kids is about an alliance between a mouse and an elephant. This story shatters the notion that being big means strong and being small means insignificant. The story begins with a bit of a tragedy, as the elephant king and his subjects unintentionally trample over the mice kingdom, ruining their homes and injuring some of them. After this incident, the mouse king goes to the elephant king to ask for mercy in exchange for help whenever the elephant king should require it. The Elephant king agrees, and a few days later finds himself in need of help from his new ally to get out of a trap. Enjoy this story and its triumphant end by watching the video below!

A hungry lion, a smart jackal and a talking cave – could this Panchatantra short story get any more alluring? Well, like all good stories that feature animals, it starts off with a hungry lion who is searching for food to eat in the jungle. The lion comes across a cave and presumes an animal must live inside. He decides to hide behind a bush and wait for his prey. Well, does the lion catch his prey? Is the cave empty? Is there even a jackal in the cave? All these questions will be answered when you watch the video below!

In this story, a poor Brahmin receives a bowl of rice, and even after eating the rice to his heart’s content, there is still plenty left in the bowl. So, he hangs the bowl in a safe place near his bed, watching over it. As he drifts off to sleep, the Brahmin has a dream about trading the bowl of rice for gold. Still dreaming, he then uses the gold to buy a pair of goats that quickly turns into a herd. And so the dream goes, transforming his bowl of rice into wealth. How does his dream end, you ask? Is it a nightmare or a dream come true? Find out below!

9. The Monkey And The Wedge

One of the many reasons people love Panchatantra stories for kids is because of the moral messages that are told humorously. This story about a monkey and a wedge of wood is one of those witty moral stories that kids will remember. The moral is about minding one’s own business. In this story, a curious monkey notices a wedge in a log that has been left there by a woodcutter. While his monkey friends are busy playing with the woodcutter’s tools, he heads toward the log with the wedge. What happens next? Find out by watching the short story video below!

10. The Jackal And The Drum

This next story is about a jackal, a drum and about being very hungry. The jackal in this story is extremely hungry and so, he looks for food all over the forest. He comes across a carrot that he tries to steal from a rabbit, but he isn’t successful in capturing it. Instead, it gets caught in his mouth, not allowing him to chew. Still hungry, and still in search of food, he suddenly hears a “Dum Dum” – what is this curious sound? Well, the Jackal heads off in the direction of the sound to see what has caused it. Could the beats be taking him closer to food? Find out in the video below!

We hope you enjoyed these ten Panchatantra stories for kids. If you’re in search of more you could look online or in bookstores. Alternatively, you could ask the grandparents or elders in the household, who probably grew up listening to these stories. These stories are ideal for bedtime or short car rides. However, If your child needs something more than short stories, then head over to GetLitt!’s library where we have over 300+ Indian children’s books to read.

Previous Posts Best Books of Tintin - including the controversial ones!
Next Posts Storytelling Videos For Kids - Amazing Animals!