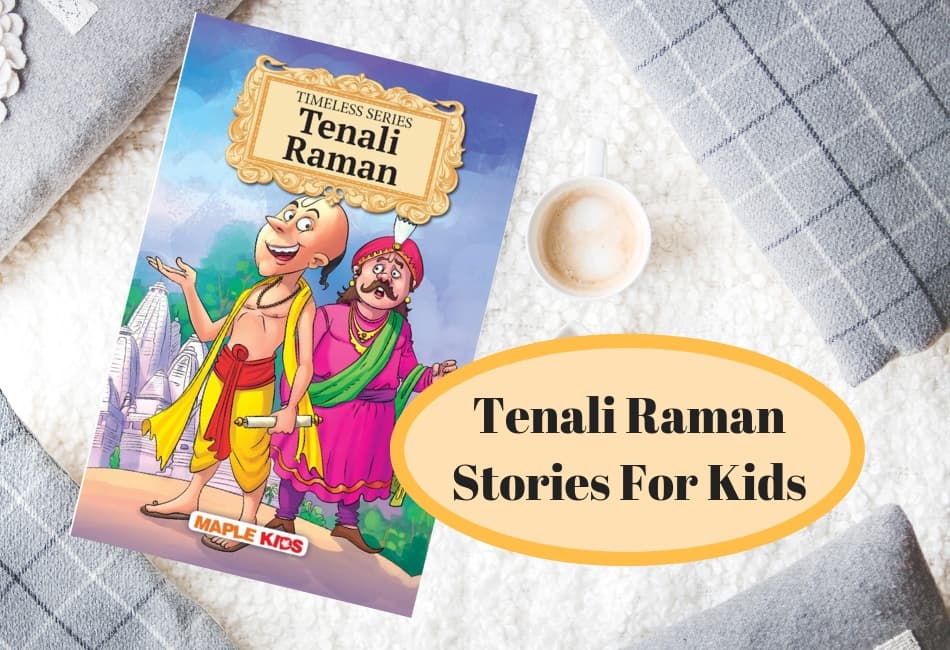 If there is one thing we sincerely believe in, here at GetLitt!, is that stories are one of the best ways to teach children life lessons. It’s not just books but also storytellers and their stories that have been passed on through oral tradition that add value to our kids’ lives. One such storyteller is Tenali Ramakrishna a.k.a Tenali Raman or Tenali Rama.

Who is Tenali Rama?

Tenali Rama was a Telugu poet and advisor in the court of King Krishnadevaraya, in what is now known as Andhra Pradesh. He was also known as the court jester because of his witty and humorous stories. Tenali Rama had a penchant for solving issues using his intelligence and values, and hence, his stories make for great bedtime stories for kids.

These mythological stories have been passed down since the early 16th century. More recently they’ve seen a revival which is all thanks to the animated series by Cartoon Network (India) called ‘The Adventures of Tenali Raman.’ The success of the show and his stories led to spin-offs like the animated series Rajguru Aur Tenaliram which was aired on Star Utsav and is now available on YouTube.

Nothing can beat the charm of reading these stories, which is why we wanted to shortlist our favourite Tanali Raman short stories for you. If your kids love problem-solving moral stories, then they’re going to enjoy listening to these Tenali Raman stories in English.

1 – The Biggest Fool In The Kingdom! 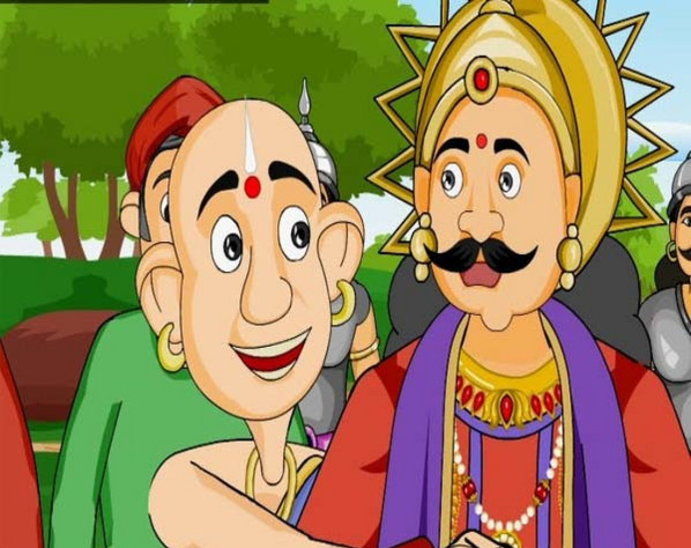 King Krishnadevaraya loved horses and had the best collection of horse breeds in the Kingdom. Well, one day, a trader came to the King and told him that he had brought with him a horse of the best breed in Arabia.

He invited the King to inspect the horse. King Krishnadevaraya loved the horse; so the trader said that the King could buy this one and that he had two more like this one, back in Arabia that he would go back to get. The King loved the horse so much that he had to have the other two as well. He paid the trader 5000 gold coins in advance. The trader promised that he would return within two days with the other horses.

Two days turned into two weeks, and still, there was no sign of the trader and the two horses. One evening, to ease his mind, the King went on a stroll in his garden. There he spotted Tenali Raman writing down something on a piece of paper. Curious, the King asked Tenali what he was jotting down.

Tenali Raman was hesitant, but after further questioning, he showed the King the paper. On the paper was a list of names, the King’s being at the top of the list. Tenali said these were the names of the biggest fools in the Vijayanagara Kingdom!

As expected, the King was furious that his name was at the top and asked Tenali Raman for an explanation. Tenali referred to the horse story, saying the King was a fool to believe that the trader, a stranger, would return after receiving 5000 gold coins.

Countering his argument, the King then asked, what happens if/when the trader does come back? In true Tenali humour, he replied saying, in that case, the trader would be a bigger fool, and his name would replace the King’s on the list!

2 – Handful of Grain and Coins 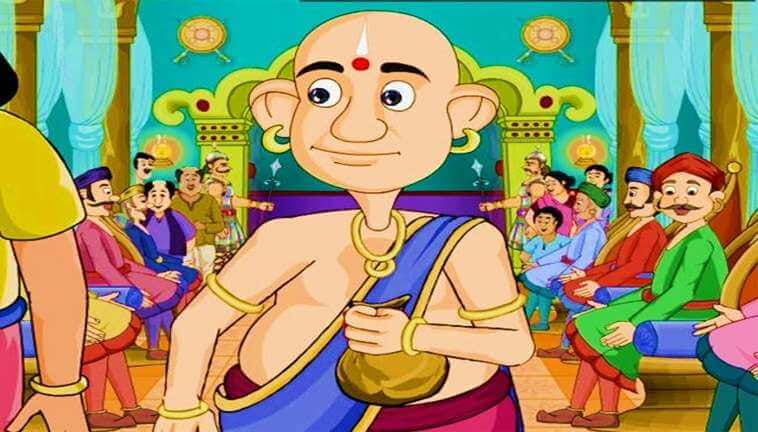 There was an arrogant woman named Vidhyulatha in the Vijayanagara Kingdom. She was proud of her accomplishments and loved showing off her intelligence. One day she put up a board outside her house, offering anyone 1000 gold coins if they could outsmart her wit, wisdom and intelligence.

Many scholars took up her challenge, but she could not be defeated. That is until one day a man selling firewood arrived. He started shouting on top of his voice outside her door. Irritated with his shouting, Vidhyulatha asked the man to sell her his firewood.

The man said he would sell her his firewood in exchange for a ‘handful grain.’ She agreed and asked him to put the firewood in the backyard. However, the man insisted that she had not understood what he had actually asked for. He then said that if she couldn’t pay him the exact price of a ‘handful grain’, then she must take down her challenge board and give him 1000 gold coins.

Getting angry, Vidhyulatha accused him of talking nonsense. The vendor said it was not nonsense, and since she had not understood his price, she should concede defeat. Hearing these words, Vidhyulatha started getting frustrated with the vendor. After hours of arguing, they decided to go to the provincial court.

The judge heard what Vidhyulatha had to say and then asked the firewood vendor to give his explanation. The vendor explained that he wanted a ‘handful grain’ which means a singular grain that would fill a hand. Since she failed to understand this, Vidhyulatha was bested and therefore she needed to take down her board and give the vendor the 1000 gold coins.

Impressed, the judge agreed, and the matter was resolved. After Vidhyulatha took down her board, she asked the vendor who he really was, doubting a simple firewood vendor could have bested her. Taking off his disguise, Tenali Raman revealed himself! He wanted to teach the arrogant and snobbish Vidhyulatha a lesson in being humble. Lesson learned!

Moral – Be humble about the talents and gifts you have. 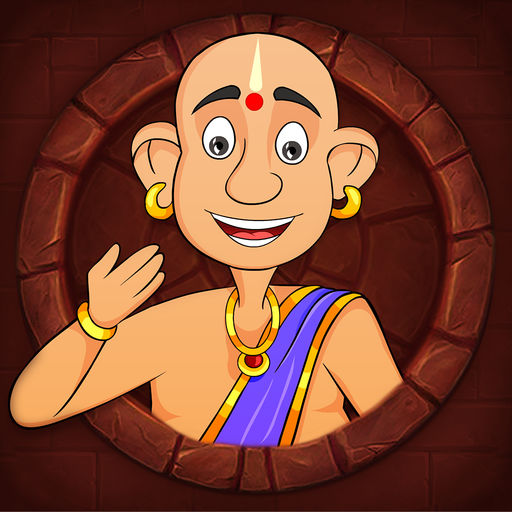 One day Tenali Rama and his friend were lying on a hammock and enjoying the gentle sea breeze. It was a beautiful day, and both men were smiling to themselves. Seeing his friend, Tenali inquired as to what was causing him to smile. His friend replied saying he was thinking about the day when he will be truly happy.

“When is that?” Tenali Rama asked. His friend went on to explain that he will truly feel happy when he has a house by the sea, with a comfortable car, a big bank balance, a pretty wife and four sons who would get educated and earn a lot of money.

Interrupting this monologue, Tenali asked, “After all this, what will you do?” To which his friend replies “After all this, I can put my feet up, enjoy the sea breeze and the sun on my face.” Hearing this, Tenali gives out a mighty laugh and says “But aren’t you doing just that now? Minus all the hard work!”

Moral – Be happy in the moment! 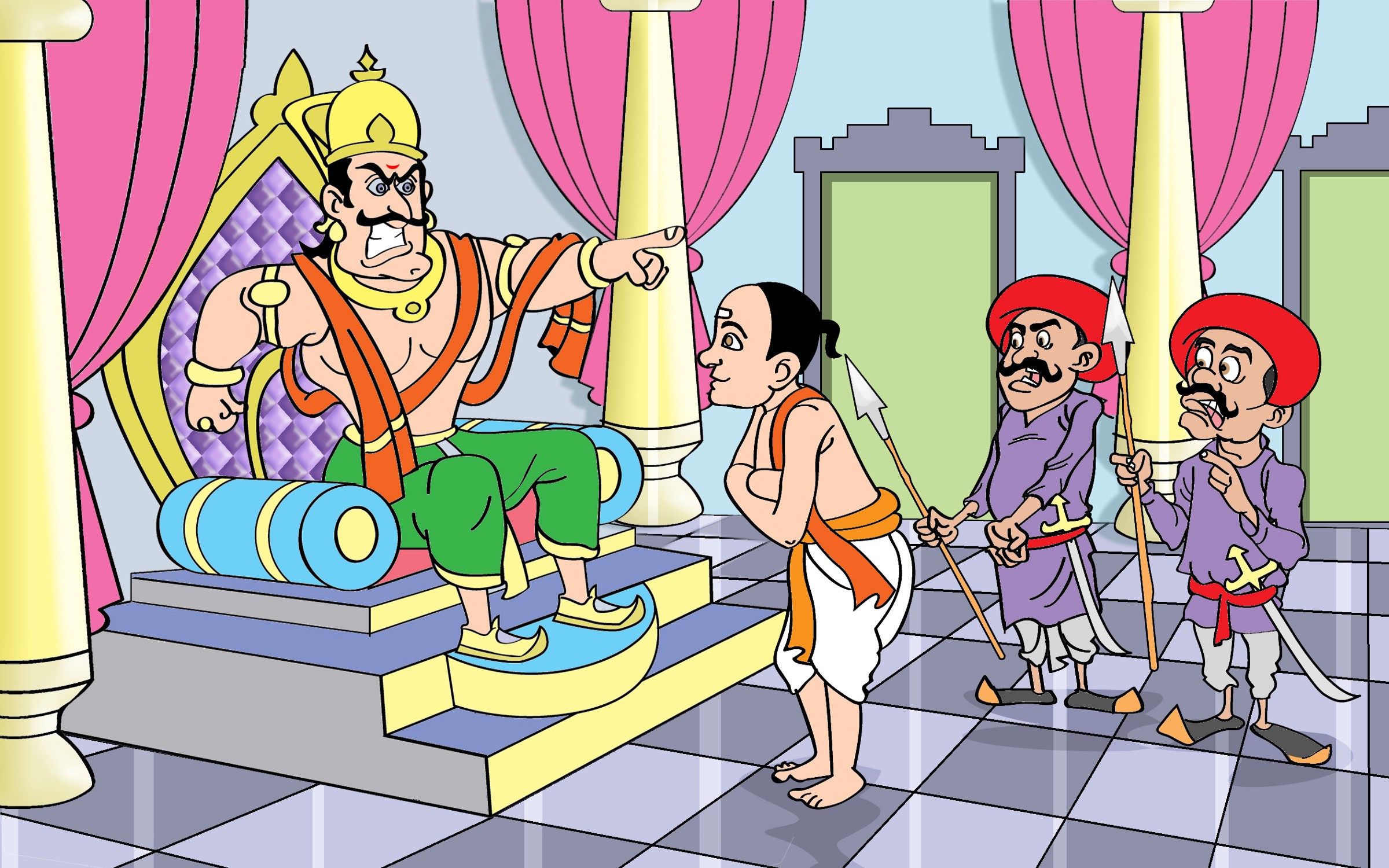 In the Kingdom of Vijayanagara, there lived a man named Ramaya. The rumour was that if one saw Ramaya in the morning, they would be cursed and not be able to eat the whole day. Hearing this, the King wanted to test it out for himself.

The guards made the arrangements for Ramaya and set up a room right next to the King for him. The next morning, the King walked to Ramaya’s room, so he could look at him first thing and test this rumour out.

It just so happened that at lunchtime, the King spotted a fly in his meal and asked the cook to take it away and prepare a new lunch. By the time lunch was served again, the King had lost his appetite and realised that this rumour was indeed true – seeing Ramaya’s face first thing in the morning did cause people to be cursed. He didn’t wish this for his people and demanded that Ramaya be hanged.

Distraught, Ramaya’s wife goes to Tenali Raman for help as she doesn’t want to lose her husband. Hearing the whole story, Tenali Raman goes to Ramaya and whispers something into his ear, right before he is to be taken to be hanged.

On the same day, the guards ask Ramaya if he has any last wishes. Ramaya says he wants to give the King a note that he must read before the hanging. The guards deliver this note to the King. In the note were the words Tenali Raman had whispered – ‘If seeing Ramaya’s face, one loses their appetite; then a person who sees the King’s face, first thing in the morning, is destined to lose his life. Who is, therefore, more cursed – Ramaya or the King?’

Reading this, the King understood his mistake and set Ramaya free!

Moral – Don’t give in to superstitions 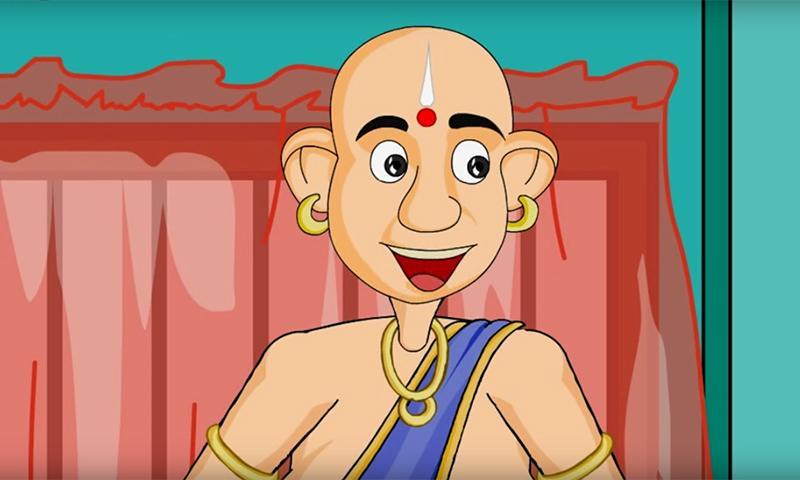 In the King’s court, there was a very orthodox teacher named Tathacharya who belonged to the Vaishnavite sect. He looked down on other people, especially the Smarthas – covering his face with a cloth whenever he saw people from this and other sects.

Fed up of this behaviour, the King and other courtiers went to Tenali Raman for his help. After listening to everyone’s complaints about the royal teacher, Tenali Raman went to Tathacharya’s house. Upon seeing Tenali, the teacher covered his face. Seeing this, Tenali asked him why he did that. He explained that Smarthas were sinners and to look upon the face of a sinner meant that he would be turned into a donkey in his next life. That’s when an idea struck Tenali!

One day, Tenali, the King, Tathacharya and the other courtiers went on a picnic together. As they were returning from their picnic, Tenali spotted some donkeys. He immediately ran up to them and started saluting them. Puzzled, the King asked Tenali why he was saluting the donkeys. Tenali then explained that he was paying his respects to Tathacharya’s ancestors, who had become donkeys after looking at the faces of Smarthas.

Moral – Don’t judge people on their caste or religion.

Those were some of our favourite short stories from the famous Tenali Raman Collection. We hope you liked them and will use these for your next bedtime storytelling session!

If you want a fun children’s book to read, head over to GetLitt! today and subscribe to get access to over 200 books.

Previous Posts Illustrator Spotlight - Deepti Sunder and Her World Of Wonders!
Next Posts How To Avoid Grammatical Mistakes In English